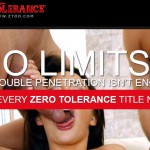 Current update frequency:
Varies, but averaging about one new DVD a week